About the NOx Fund

What has the NOx Fund achieved?

In 2007 the NOx tax was one of few environmental policy measures to reduce NOx emissions. In several industries, especially those with high NOx intensity and weak economy, the fiscal tax reduced the enterprises financial ability to implement measures. Fiscal tax alone therefore contributed to a small extent to measures to reduce NOx emissions. Consequently, this did not provide any basis for development and phasing-in of new technology. The fiscal NOx tax was introduced in 2007 at NOK 15 per kilo NOx. This became financial difficult for many enterprises. Therefore, several different business organisations together recommended a solution with a NOx Fund, instead of the fiscal tax, in order to achieve the highest environmental benefits in relation to accrued expenses for the enterprises. Negotiations started with the authorities about a NOx Agreement to make this possible.The NOx Fund accelerated efforts to cut NOx emissions by granting financial support to the industry to implement green technology.

An important motivation for entering into the agreements was to develop new and improved solutions for environmental technology in shipping and fishing, as well as to ensure implementation of the solutions in the market. Electrification of maritime activity using battery technology, LNG operation of ships and NOx cleaning with catalysts are examples of technologies with high volume triggered by the NOx Fund's support. Norwegian enterprises are today the world's leading suppliers and users of such technologies.

The NOx Fund has been important for the supplier industry. Support from the Fund has triggered an increase in demand for NOx-reducing technologies with NOK 14 billion since 2008, especially within the maritime sector where the largest share of the Fund's support has been granted. This has contributed to a Norwegian maritime industry with leading edge in an international market. Continuous stricter requirements for emissions from international shipping provide opportunities for the Norwegian supplier industry in a market that is significantly larger than the Norwegian.

Minister of Climate and Environment Ola Elvestuen stated when the NOx Agreement 2018-2025 was approved by the EFTA Surveillance Authority ESA "I would like to commend the business industries and the NOx Fund for their efforts to reduce emissions. The contributions from the NOx Fund have meant a lot for the introduction of low and zero emission technology such as LNG and electrical operation on ships." This statement is part of many statements by politicians and business leaders, which show a broad consensus that the NOx Fund is a good instrument.

Illustration of how the NOx Fund works 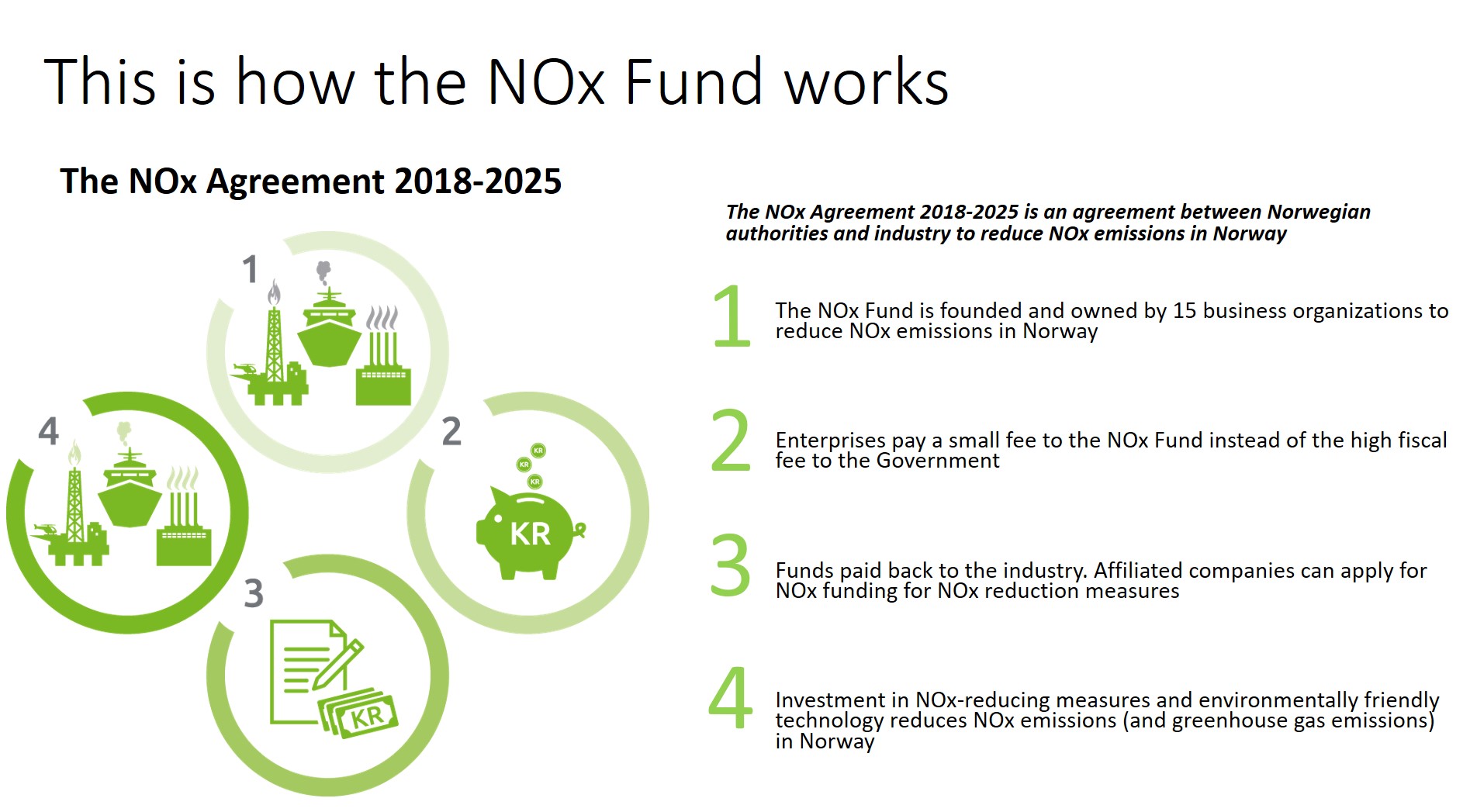